As you all know it is teen domestic violence awareness month.  It is very important to recognize the signs before getting caught up into a dangerous relationship that may take you years to get out of or even worse, death.  I can reflect back to my school age and recall how some young men were so aggressive and angry towards girls that it was labeled as “he just likes you that’s all” phase.  But in reality, it’s not cool for young men to put their hands on young girls in that manner; especially if she didn’t put her hands on him. This generation of children is becoming more acceptable with being abused because the glorification illustrated within the entertainment industry as well as their own household. But can we blame them? Hell, my generation glorified abuse by illustrating pimps and hoes as the “manly” way to be and treat your women. Women in those films didn’t have a voice and were considered property. The blatant disrespect and abuse glorified for over forty years have either confused or strengthen us. 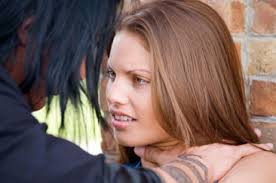 Thirty-three percent of teens that were in a violent relationship told someone about the abuse, but not their parent. Eighty-one percent of parents believe that teen dating violence is not an issue or admit they don’t know if it’s an issue at all. This same group of parents believes they could spot their child is in an abusive relationship and recognize the signs (loveisrespect.org). Think about it. Do our young children really understand how serious it is to be mentally, sexually, emotionally, and/or physically abused by the person they think loves them? Do they understand the difference between a healthy and unhealthy relationship? I can admit that I witnessed so many relationships that were unhealthy and abusive at a young age; that I couldn’t grasp a clear understanding of what love really was.  My generation could not discuss what we had going on in our households, let alone what our entire family was dealing with.  The generations before me normalized abused as a part of relationships; therefore a cycle was formed amongst many parents, grandparents, and great grandparents.

Let me leave you with this.  Think about all the traumatic things you either witnessed or been a part of.  Would you want your child(ren) to endure any of those emotions at the hands of a boyfriend/girlfriend?  Our children today already deal with so many issues that we tried to shield them from.  Why not be that parent that is open to listening, snooping when it is necessary, and protecting them at all cost?  I know we can’t always know everything our kids are going thru, but know that our teenagers are still young minded and need guidance like we needed as a growing teenager.  Hell, I didn’t get it together as an adult.

Here are just a few signs your teenager or young adult is going thru some type of abuse:

If any of these signs are visible for any reason, please be a concerned parent.  Don’t ignore the signs. Always show them that you are always going to be there for them when and if they are ready to talk.  Remember, many who are abused do not tell because of fear of what others will say about them.  Don’t make him/her feel it is their fault for being in the relationship.  Be their support system that is needed during this trying time.  They may not leave at that moment so be prepared to work through the process together. Unconditional love is what our children need.